My thoughts on the World

Learning is a roller coaster.  You need to go through a dip to make it up the next hill.

I recently watched a situation that was completely avoidable.  An organization decided to change how team leaders within the program interacted with each other.  To facilitate this change, a PowerPoint deck was created, and the various people involved were trained.

Within weeks, the new change seems to be making things worse.  Team leaders weren’t sure what to do.  They struggled with the new responsibilities.  The leader’s productivity started to take a hit.  One of the proposed solutions presented to address this drop in productivity was more training.

While more training might be helpful, the lack of training is usually not the root cause of people struggling with change. 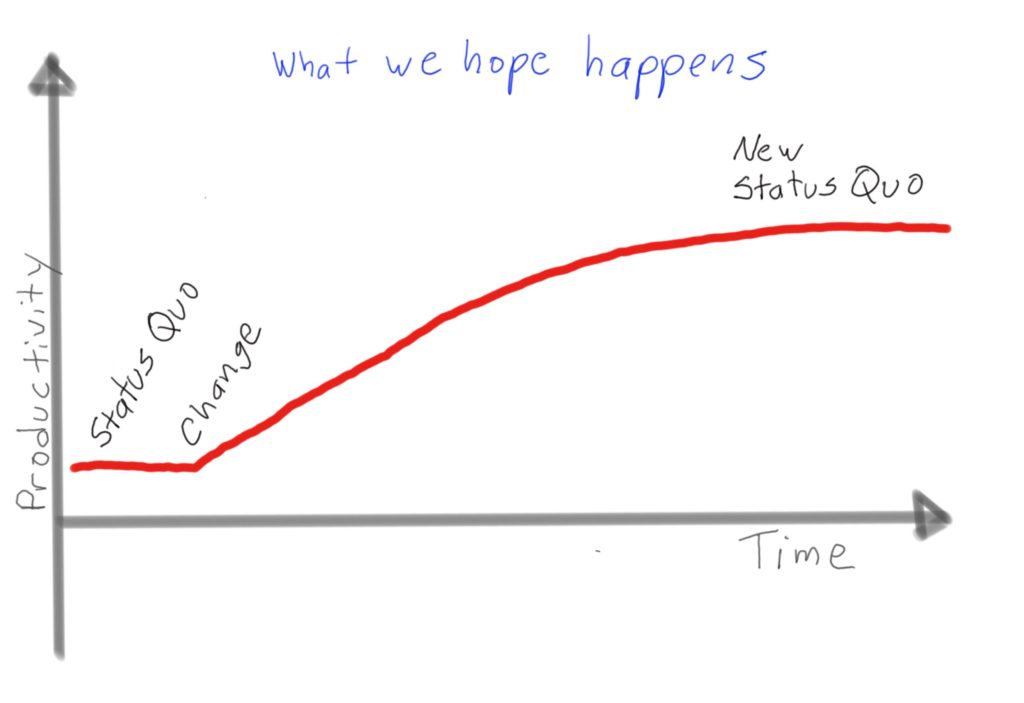 What we want to happen.

The figure above shows what most stakeholders want to have happened when a team implements a new way of thinking.  Most people will agree that the change will not increase performance immediately, but they expect things to get better, not worse.  Unfortunately, that is not the way reality works most of the time. Unless it is a trivial change, productivity will take a dip when a team first implements the change.

The dip can be shown using the Satir Change Model in the figure above.  (Several other models exist.  Feel free to use the one you like.)  The model starts with the Late Status Quo.  This status quo is interrupted by either an internal change or a foreign element interrupting the team.  This change then leads to a combination of resistance and chaos.  As the team transitions into chaos, performance suffers.  The chaos phase is the most critical.  In this phase, people are tempted to abandon the change and go back to the old way of doing things.  If the team holds on, there is a time when the new change seems to click.  The change makes sense and productivity starts to improve.  This phase is called the integration and practice phase.  If all goes well, performance continues to increase until the team proceeds to a new status quo.

Now that we have some of the theory, how can we use this knowledge?

First, when you are looking to integrate change, talk about the dip.  Do you have time for the dip?  How long do you think the dip will last?  In the example above, the program had very aggressive, hard deadlines.  The teams should have discussed if they had time for the dip.

Second, decide how long the team will commit to the changes before abandoning the them.  I’ve seen teams abandon changes right as they were showing signs of “get it.”  I believe to this day that the team was transitioning to the integration and practice phase and was on the road to a new status quo.

Third, Stick to it!! Give it a chance to succeed. During the chaos phase, it’s easy to feel you made the wrong decision, but use your team grit and drive on.  If you are still having problems after giving it an appropriate amount of time, try to tweak your change.

Seeing a temporary dip in performance when making a change is normal.  If you know it is coming; you can prepare yourself and others for the dip.  When it’s not a surprise, the chaos the change can bring will be more manageable.

What dips in performance how you see where you work?

Image of Bridge by Jonas Verstuyft on Unsplash

Theme by Anders Noren — Up ↑